The primary activities of Frozit Bhd are manufacturing, sale, trading and distribution of frozen food products in Malaysia. The company has become one of the leading exporters and largest manufacturers of frozen Asian culinary delights worldwide. Despite setbacks during the covid19 pandemic, the company managed to deliver a good performance for the financial year
2021.

Frozit Bhd gained control over Supreme Bhd by acquiring 90% of Supreme Bhd’s ordinary shares on 1 January 2019, when the retained earnings and other reserves of Supreme Bhd were RM2.5 million and RM2 million respectively. The consideration for the business acquisition had been settled.

On 1 April 2021, Frozit Bhd disposed of 20% of its ordinary shares in Supreme Bhd for a cash consideration of RM6 million. This transaction has not yet been recorded.

Revaluation of Nutri Bhd’s net assets on the date of the acquisition indicated that the fair value was equal to the carrying amount. However, on that date, Frozit Bhd also valued Nutri Bhd’s customer list, which Nutri Bhd has not recognised, as an intangible asset at a fair value of

RM0.2 million. It was to be amortised over five years.

Frozit Bhd acquired 25% of Crest Bhd’s ordinary shares on 1 January 2020. On that date, the retained profit of Crest Bhd stood at RM1 million, and the fair value of Crest Bhd’s net assets was equal to the carrying amount. With this interest, Frozit Bhd was able to exercise significant influence over the decision on the relevant activities of Crest Bhd.

The following are the companies’ financial statements for the year ended 31 December 2021.

Statements of Financial Position as at 31 December 2021 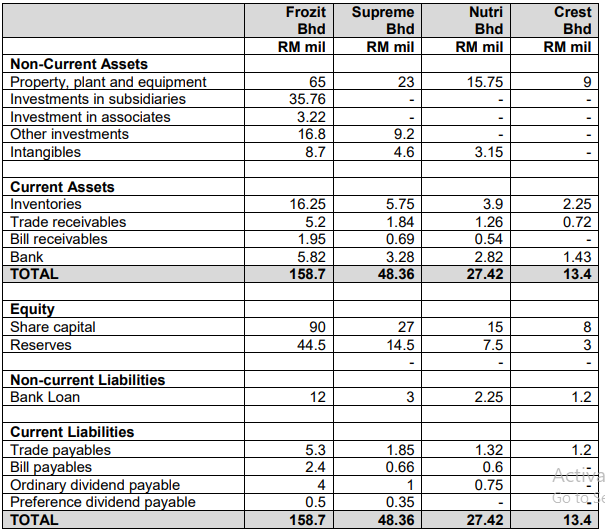 1. On 1 October 2021, Nutri Bhd sold equipment to Frozit Bhd at a gain of RM0.2 million. Nutri Bhd’s statement of profit or loss and other comprehensive income recognized the gain as ‘other income’. The remaining useful life of the equipment on the date of disposal was two (2) years.

3. Frozit Bhd sold goods worth RM3 million to Crest Bhd during the year. As of 31 December 2021, RM1 million worth of these goods remained in Crest Bhd’s inventory.

4. Half of the bills payable of Nutri Bhd were drawn in favour of Frozit Bhd. Frozit Bhd had discounted RM0.14 million of these bills.

8. All companies declared a dividend on ordinary shares and preference shares on 30 December 2021. Frozit Bhd had not recognized any receivable from its subsidiaries.

9. All profits or losses were deemed to accrue evenly throughout the year.

• Measures the non-controlling interests at its proportionate share of the fair value of the net assets of the subsidiaries at the acquisition date.

• Depreciate its property, plant and equipment using straight-line method, on a yearly basis, charging the full year’s depreciation in the year of purchase and none in the year of disposal.
• All inter-company sales are marked up by 20% on the sales value.

a. Compute the goodwill or bargain purchase for the acquisition of Supreme Bhd.

b. Compute the goodwill or bargain purchase for the acquisition of Nutri Bhd.

c. Compute the gain or loss on the disposal of shares in Supreme Bhd.

d. Prepare the Consolidated Statement of Profit or Loss and Other Comprehensive Income for Frozit Bhd Group for the year ended 31 December 2021.

e. Prepare the Consolidated Statement of Changes in Equity for Frozit Bhd Group for the year ended 31 December 2021, showing the group retained profit and non-controlling interests.

f. Prepare the Consolidated Statement of Financial Position for Frozit Bhd Group as at 31 December 2021.

With reference to the relevant Malaysian Financial Reporting Standards, explain briefly which investor is most likely to control Lapis Bhd. Justify your answer.

b. Hylo Bhd has investments in several subsidiaries. Hylo Bhd owned 85% of the issued equity shares in Odele Bhd, which was acquired for RM200 million. Odele Bhd had 500 million issued equity shares. On 1 October 2021, Pippa Bhd made a private offer to buy 80% of Hylo Bhd’s interest in Odele Bhd for RM455 million. Hylo accepted the offer on 1 October 2021. The financial year-end of the Hylo Bhd group is 31 December.

i. Identify the relationship between Hylo Bhd and Odele Bhd after the private offer. (Show relevant workings to justify your answer).

ii. With reference to MFRS 10 Consolidated Financial Statements, explain briefly the effect of the private offer in the consolidated financial statements for the year ended 31 December 2021.

Required:
i. Identify the related parties to North Bhd with reference to MFRS 124 Related Party Disclosures.

ii. Explain briefly whether investors (North and West) have control, joint control, or significant influence in their respective investees.

Sonic Bhd, incorporated 15 years ago, had diversified its activities and expanded its operations by acquisitions of shares in subsidiaries and associate companies. Accounts for all companies are made up to 31 December. The consolidated financial statements of Sonic Bhd as at 31 December 2021 and its comparative figures are as follows 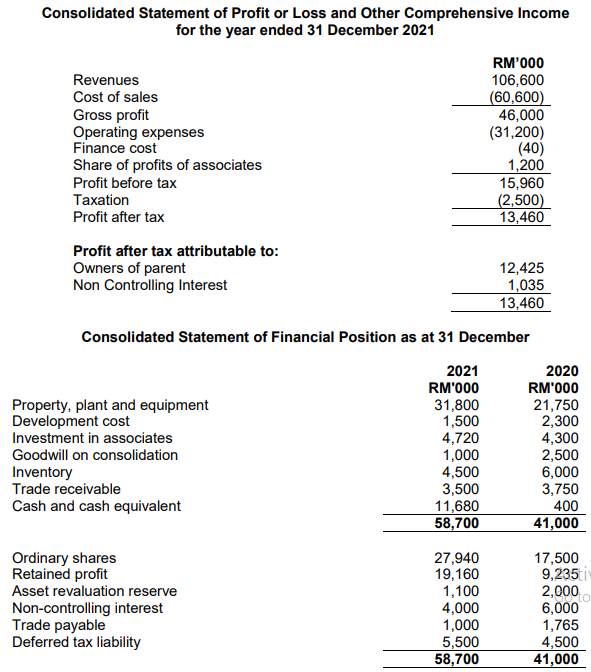 2. During the year, a machine with a carrying value of RM5,000,000 was disposed for RM6,000,000. In addition, Sonic Bhd has acquired equipment at the fair value of RM500,000, and the acquisition was resolved through the issuance of ordinary shares.

Freehold land was revalued at a deficit of RM900,000 during the year. The land had previously been revalued, and the asset revaluation surplus is related to the land.

4. On 1 January 2021, Sonic Bhd acquired 75% interest in Tunggak Bhd. The
consideration was settled partly by issuing ordinary shares in Sonic Bhd at a fair value of RM6,500,000 and immediate cash. The fair value of the net assets of Tunggak Bhd at the date of acquisition was as follows:

5. The non-controlling interest was measured at its proportionate share of the fair value of the subsidiary’s identifiable net assets on the acquisition date.

Required:
a. Determine the cash consideration arising from the acquisition of Tunggak Bhd on 1 January 2021.

b. Prepare the Consolidated Statement of Cash Flows of Sonic Bhd Group for the year ended 31 December 2021, using the INDIRECT METHOD.

Get Solution of this Assessment. Hire Experts to solve this assignment for you Before Deadline.

Get Help By Expert

This course is the study of information systems focusing on their use in business and management. This course provides students with a look at how technology can be used to… Management

The IRS1011B IPSIS Research Skills Seminar Series (SSBM) Assignment Sample is an outline of the types and concepts you will be exploring in your research. This document includes questions to… Others

My first try was fantastic. I received a passing grade on my social science assignment; it is undoubtedly reflective, and I had to make some revisions, but the author had expert knowledge and abilities.

My Law Assignment was excellent.

For students, this is a dependable resource. According to the guidelines, everything was handled. the business that is most suited for the job. My law assignment ended up being fantastic. I sincerely appreciate everything. You’re awesome.

The expert gave the best work and consented to make the necessary changes. I’m overjoyed. Simply turn in your assignment on schedule to give them time to finish it.

The accounting assignment help I received was excellent. The answers were very clear and helped me understand the concepts. Thank you for your hard work!

I am very pleased with the operations management assignment help I received from this service. It was well-written, had no plagiarism, and was delivered on time.

Get Assistance for Assignments, online Exam, and Projects Writing

Fill Details below to start chat with Expert

To Get Answer
Please Fill the following Details